The hit TV show, the Big Bang Theory, had its final episode in May of 2019. For us at Indigo Instruments, this is particularly memorable since our unique DNA model appeared in Sheldon & Leonard’s apartment starting in season 2. The model had been designed with 17 base pairs but the props people bought 2 & stacked them for the version you see in the show. Some of the science behind the model and a brief history follows below.

Each layer of the Indigo® DNA model consists of an AT or GC base pair. Each layer turns ~36 degrees compared to the layer immediately layer above or below it. This works out to roughly 10.5 DNA base pairs which we rounded up to 11 to make a complete turn of 360o.  We then decided to make it 17 base pairs or 1.5 turns and make it a more impressive 3 foot (~0.5m) tall model.  The first one we sold went to Bell Labs in New Jersey in 2000 and we have since shipped over 400 to prestigious universities, museums, companies, law offices & private citizens around the world. 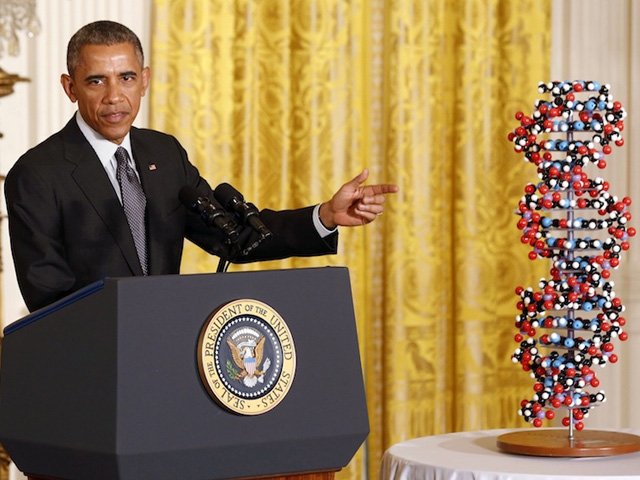 President Obama announced the Precision Medicine Initiative at the NIH in 2015. Our original 17 base pair DNA model is a fitting prop for science & medical breakthroughs that were to follow.

The set designers wanted something unique and eye catching so they bought 2 models to stack on top of one another to produce the 6 foot (~2m) tall model you see in the show. They had to build an external support structure behind it since the standard support rod was only sturdy enough for a single double helix model.

The Best Big DNA Model in the World

We’ve had requests over the years for a standalone version of the BBT model. The simplest solution of course was to double the length of the support rod & the number of base pairs. However, there are slight positional errors incurred with each base pair & this in turn would have compromised the accuracy of the major & minor grooves over the greater height. This is not trivial since much of the chemistry of DNA takes place there and no other model represents this feature correctly (except our other teaching DNA model). Just adding a longer, stronger rod was enough to distort the model.

Further, we wanted to make it to 36 base pairs. Short peptides, 8-12 amino acids long, are important biochemically. We wanted the model to reflect this since 3 base pairs  code for an amino acid. A 34 or 35 base pair version only codes for 11 amino acids so the redesign had to allow for 2 more to achieve the 3:1 ratio. Prof. Neil Straus, the designer of the 12 & 17 base Indigo® DNA models, offered invaluable input that helped us produce the 36 base pair version you see below. The spacing of the major and minor grooves are as technically correct as its forebear.

The improved Indigo® Big Bang Theory DNA model features 36 base pairs or layers. The picture does not show the wider base we now use.

What Makes a DNA Model Accurate?

There are 16 ways to build 2 layers of a DNA model; 64 ways to build a 3 layer model and so on. There are theoretically 436 possible ways to build a 36 base pair model. The base pairs in a real DNA double helix don’t just rotate 36 degrees about the central axis. They also pitch, roll & raw, all of which are corrected for to make this an accurate, straight, stand up model. Wikipedia’s article  nucleic acid double helix for more details.

The accuracy of the DNA model is best illustrated with the optional Indigo® alpha helix model. It fits into the major groove with a little bit of clearance. It barely fits the minor groove as one would expect as it mimics the stearic hindrance in the real double helix.

An actual DNA molecule has millions of base pairs and it ultimately contorts through numerous hairpin turns along its length. The combinations of all the base pairs is truly astronomical as evidenced by the diversity of life on Earth.