Star Trek fans will recall the episode “Devil in the Dark” where a silicon based creature burrowed through rock. While we know of no such animal, silicon does form a diverse range of molecules, suggesting it is not impossible. On Earth, it forms over 3000 different compounds. Many of these are silicates and an interesting subgroup of these are zeolite catalysts.

What is a Zeolite?

Zeolites are a class of natural and synthetic silicate compounds characterized by “cage” structures. Their chemical composition is mainly silicon and oxygen with varying amounts of aluminum substituting for silicon. Other elements such as sodium, calcium and magnesium also contribute to hundreds of different versions. Zeolite  use includes molecular sieves, water purifiers and catalysts. They may also improve the way oxygen can be removed from air for use in medical & industrial applications.

One of our customers, Clifford Avery, uses zeolite molecular models to illustrate how their structure makes them useful for “cracking” hydrocarbons. In other words, reducing crude oil into the various types of fuel we use in heating, cars, barbecues, lamps and more.  Note, that FCC can also mean face centered cubic which is completely unrelated to this application.

In Cliff’s own words:

“I use the models for Albemarle’s FCC (Fluid Catalytic Cracking) Process Course. In our modules that cover FCC catalyst and FCC additives, these models allow our students to visualize Y-zeolites and ZSM-5 zeolites widely used in the oil refining industry. We can show the supercage sodalite and the side cages. Within the supercage we can show where the acid site are (green, Al atoms), their distance apart and how the cracking mechanism occurs. I used the (white) H atoms to demonstrate the process of de-alumination.” For the ZSM-5 zeolite we can show how the 2-dimentional pore openings favor the cracking of straight chain olefins. ZSM 5 zeolite catalyst built with Minit atoms/bonds on the left. A computer model is shown to the right (image courtesy Wikipedia).

This structure is quite complex with no instructions available and should only be attempted by an expert. Minit and Orbit are trademarks of Cochranes of Oxford and describe their style of molecular models. They differ only in size; Minit has a 6mm atom centre, Orbit 10mm. 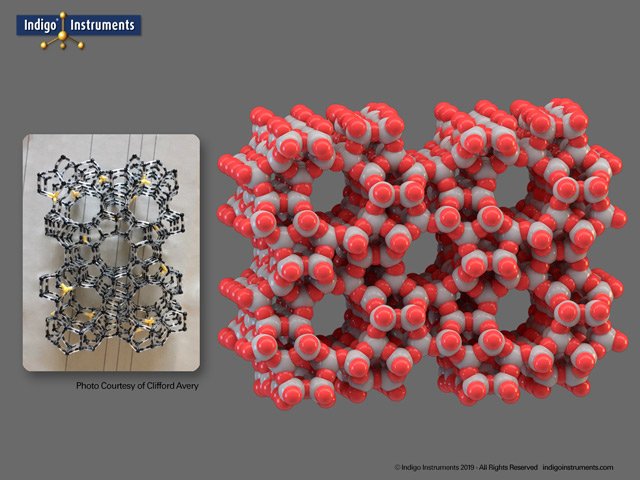 Here is a picture of the modules made with Indigo® Minit molecular model parts.

Clifford Avery is the Global FCC (Fluid Catalytic Cracking)Process Advisor for Albemarle Corporation, Houston, Texas. In this role, he leads the global FCC effort in training, troubleshooting and performing unit health checks for Albemarle’s FCC customers and sales teams. He has held positions in Business, Technical Services (FCC) and Sales (Hydroprocessing and FCC). His experience in working with FCC units is global, with particular emphasis in the North American and Asia Pacific regions.

Cliff received his B.S. degree in Chemical Engineering from California State University, Long Beach and has over 33 years of experience in the FCC/hydrocarbon processing industry.

The overall structure of zeolite catalysts can be hard to see on paper or on screen. We photographed our model of Zeolite Y as stereo pairs. One version you can see by crossing your eyes, the other uses the Magic Eye style which requires focusing at a distant imaginary point.

Other Uses of Zeolites

Medical oxygen should not be a luxury. Other ways to produce it cheaply for medical & industrial needs.\