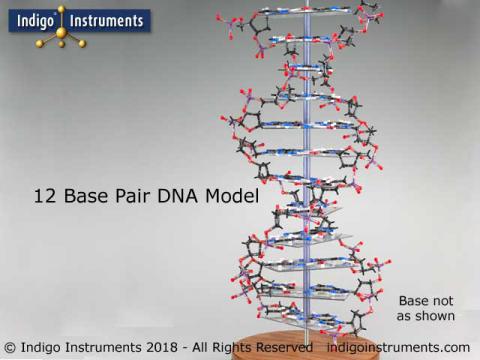 The best model for understanding the chemistry of DNA.

There are many DNA Double Helix Models available for teaching & demonstration. The most recognizable is our 17 Base Pair DNA Model of which 2 were combined to build the Big Bang Theory DNA Model. Surprisingly, a much less expensive DNA Double Helix Model has many more advantages for teaching university & even high school students about the chemical structure & elegance of this most important molecule.

Why this DNA model for teaching?

This DNA model was created as an adjunct to a course by Prof. Neil Straus (retired) of the University of Toronto over 20 years ago. Experiments in the lab section of his genetics course such as PCR (polymerase chain reaction) could take an hour or more to complete.

Having the students do nothing while they waited was unproductive & building a DNA model filled the time perfectly. 24 students (more or less) could be assigned to each model with 2 students building 1 of the base pairs.

This simple exercise had many advantages, not the least of which was that is was cheap. The model’s parts are reusable & with amortization, the cost per student-lab was about $0.10.

How does VSEPR theory come into play?

More importantly it was simply a great teaching tool. The Orbit Molecular Model system is unique among molecular models in having multiple geometries of carbon & nitrogen. In addition to the most common 120o trigonal & tetrahedral atoms, it has other trigonals  specific to 5 & 5-6 member rings such as purines.

Each base pair uses at least 5 different carbon & nitrogen atom geometries. This requires careful attention in choosing atoms of the appropriate atom geometry for correct assembly. Failure to do so guarantees not only that no base pairs will be formed, neither will a double helix. The advantage of this can not be overstated. Where a molecular modelling program would automatically adjust the atom geometry to accommodate the structure, the physical atom cannot. This may be the single most important need for understanding VSEPR theory that biology students are exposed to.

What do the unique trigonal atoms do?

There are special parts called “X” pegs which can fit into the central hole of the trigonal atoms which are then connected by their own bond. This forms a flat ring structure so that the base pairs lay flat on the plastic support layers. 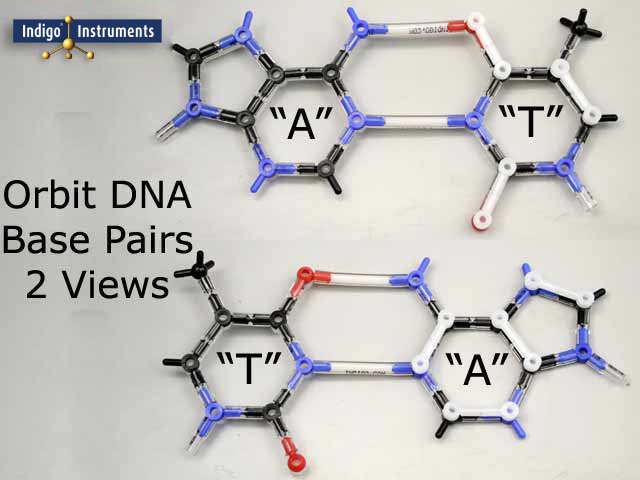 Why  “handedness” is important.

More important is that this conveys the “handedness” of the DNA bases. The double bonds are always attached to only one side of the rings. The importance of this becomes apparent when the complementary bases adenine to thymine & guanine to cytosine are attached. One of the bases in a pair is always flipped over so that the double bonds face upwards on one side while they face downwards on the other. This is done because the the 2 strands in the double helix are anti-parallel. The orientation of the double bonds ensures this & is a quick visual cue that the model has been assembled correctly.

The relevance of building the model this way becomes apparent once all the base pairs have been mounted on their layers & the sugar phosphate backbone is attached. The asymmetry of the double helix stands out as can be seen by the larger major groove & the smaller minor groove.

The Double Height version of this DNA Model

Special thanks to recently retired (May 2016) teacher, Roscoe Stribling of St. Andrews Episcopal School in Mississippi who sent us this picture of 2 models combined to form a tall one consisting of 24 base pairs. This is also fortuitous since it technically codes for 8 amino acids which is enough to build the shortest known peptides found in nature that have a biological function.

The model is supported externally using two lab support stands & is on display at the school in a room dedicated to Marshall Nirenberg who graduated from St. Andrew’s & went on to win a Nobel prize for breaking the genetic code.