If you have ever taken a chemistry course, you most likely used a beaker to measure, mix, heat & pour liquids. In a previous blog, Branded Beakers: Baristas, Brewers, Distillers Top 11 we listed how they could be useful in business promotion. In this follow-up piece, we expand on some of those ideas.

Businesses in the food & beverage service industry cover a pretty broad spectrum. One thing they have in common is using practical and cost-effective ways of promoting their businesses.  A novel way of creating brand awareness is serving beverages such as coffee, beer & liquor in custom imprinted glass chemistry beakers. A science lab glass beaker says the liquids they hold have special preparation and exceptional value. Borosilicate glass also has the advantage of resistance to thermal shock. You can heat or cool them rapidly without fear of breakage.

Pictures tell the story better than words and here are just some of the examples of work we’ve done in the last year. Logos have ranged from simple to ornate, mainly in one color screen but some with two & even a few with full-color dishwasher safe decals.

Another important consideration is whether the decal needs to be dishwasher safe. Decals are printed like paper, the ink is on the surface. If you run it through several dishwasher cycles, the ink will eventually come off. That is generally not a problem if the beaker is used to display candies or hold pens & pencils & is washed by hand occasionally. In order for the ink to survive multiple hot water wash cycles, it must have an outer protective layer added after printing. This lamination adds a cost which is proportional to the size of the decal. 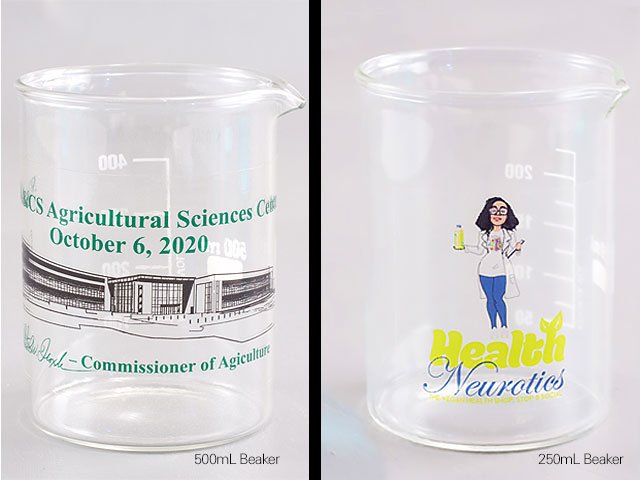 The decal on the left, while only 2 colors, wraps around to cover half the circumference. The one on the right is full color. Both have fine details that would be hard to achieve with regular screen printing.

Two-color logos need a lot of separation in the different colored elements since accurate registration of 2 barely separated colors is difficult. The one on the left is a good example of two well-separated color elements that can tolerate minor misalignment. The image to the right is an exception. The reddish-purple circle provided a backdrop to the details of the second layer done in yellow ink. These details ended up with a greenish hue.

The 250mL has two well-separated elements while the 500mL beaker has two layers.

Of course, even a single color can convey brand recognition. The 500mL beaker on the left has a very detailed logo while the one on the right looks like a simple brush stroke 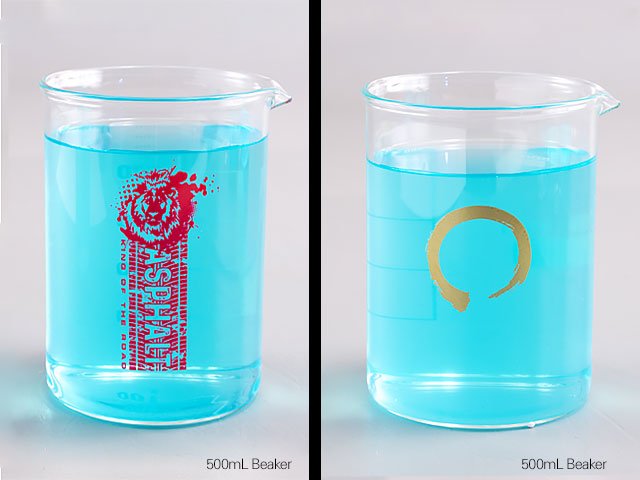 Sometimes one logo is not enough. A university wanted to hand out these 50mL beakers as freebies to their newly arrived first-year students aka freshmen. It worked out so well, they did it again in 2 successive years, each with a slightly different theme. Unfortunately, the COVID19 pandemic broke the pattern but we hear they have some other ideas for upcoming years.

These logos were done over 3 years but you also do them together. These are all on 50mL beakers and in black ink so the cost would be only slightly more than a single logo.

We can custom imprint many of our products for science-based themes for giveaways at tradeshows, openings, or mailings.