Eddy currents arise from the interaction of conductive metals and magnetism. A brief history & explanation of the phenomenon is presented below along with some simple experiments for demonstrating the effect.

What Are Eddy Currents?

In 1820, Hans Christian Ørsted discovered that an electrical current moves a compass needle. That began a series of experiments that changed the world. Only ten years later, Europe had telegraphs and Michael Faraday had invented the first transformers and generators. Faraday’s Law 1 describes how a moving magnetic field causes an electrical current in a nearby conductor. The usual demonstration involves a magnet moving in and out of a coil of insulated wire, and observing the induced current in a circuit connected to the coil. 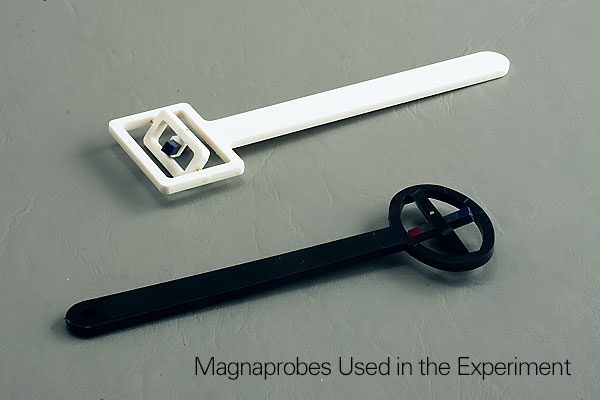 Magnaprobes are simple but sensitive analog instruments that respond to magnetic fields. The white version, the Mark I, has a jewel-mounted magnet that moves to fields as weak as 0.3 gauss. It’s even able to measure the declination of the Earth’s magnetic field. The black one, the Mark II, is a handy teaching tool for indicating the poles of magnets or outlining magnetic fields.

Fortunately, the induction effect occurs in any conductor exposed to a moving magnetic field, and the ends of a cylindrical magnet are where the magnetic force occurs at right angles to the flat faces. So the face of such a magnet moving through a metal pipe induces a current in the ring-shaped area close to that face edge. THAT current radiates a magnetic field that opposes the motion of the magnet. The magnet’s longer fall & exit than expected surprises most students. It is counter-intuitive, usually quite fascinating and a great way to generate questions about “what must be happening?”. 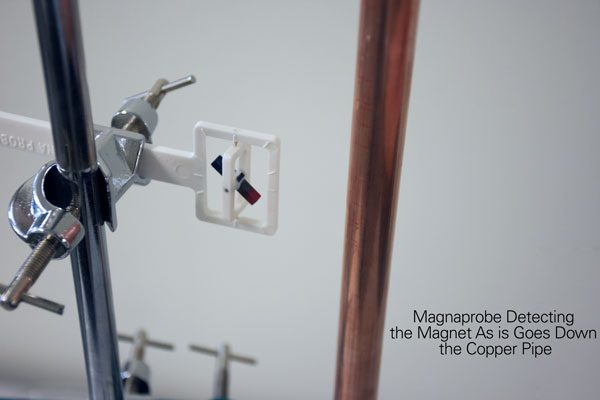 A Mark I Magnaprobe, detected eddy currents as far away as 39cm.

Magnetic force obeys the Inverse Square Law 3. The closer the magnet is to the side of the tube, the more dramatic the effect. Indigo Instruments Metric Neodymium Disc/Rod Magnets come in sizes best suited for use with standard imperial measure pipes. 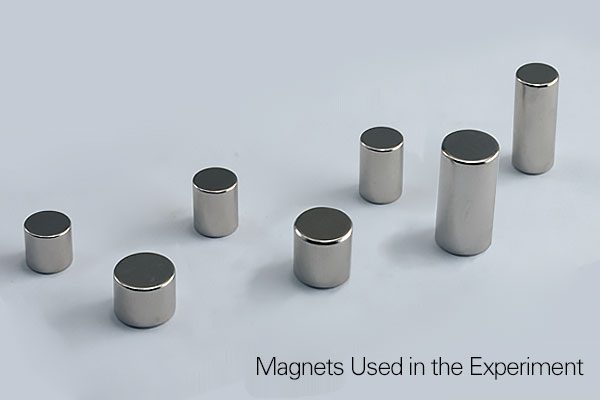 The eddy current effect is put to good use in amusement & adventure parks. Eddy current brakes can be found on roller coaster rides & drop towers & ziplines.

The first table shows the average drop time for the different magnets. Note how much longer the wider 12.5mm rods take to fall. This indicates greater attraction is directly proportional to tube wall proximity. Another way to interpret the results would be to calculate how far the magnet would have traveled in a free fall. Perhaps a more dramatic illustration of the braking effect.

The second table shows how sensitive the Mark I Magnaprobe is to the eddy current-induced magnetic field. This device is actually more sensitive than the best digital magnetic field detecting devices. Scientists at CERN once used them to find a magnetic leak so small no other device could find it. This was critical since the leak was still large enough to deflect the particle beam. Other demanding leak detection scenarios have involved MRI/NMR devices, magnetoencephalography & more.