There is a diverse range of chemicals with disinfection properties. Iodine, chlorine bleach & hydrogen peroxide are the best known. Chemically speaking they are fairly simple inorganic compounds. Quaternary ammonium compounds (aka quats or QACs) are a diverse group of larger molecules. They are organic in the chemical sense of the word & with unusual properties. We also explain how to dilute them from their concentrated form.

What are Quaternary Ammonium Compounds?

QACs (quats) have carbon chains made of carbon & hydrogen. As such, they are by definition organic. QACs also have a nitrogen atom that the 4 carbon chains attach to. Hence the nitrogen has “quaternary” bonding.

Newer QACs look like didecyldimethylammonium chloride on top which has 2 ten carbon chains, 1 on each side. An older type, such as benzalkonium chloride, on the bottom, has a benzene ring on the left & a 14 carbon chain on the right. Both QACs also have 2 short methyl (CH4) groups attached to the central nitrogen. The green atoms are chlorine or bromine (brown as shown in our Model Builder) which form QAC salts & do not contribute to the bactericidal properties

Compare the structures of the quaternary ammonium disinfectant compounds above to the simpler molecules shown below.  Hypochlorite & chlorine dioxide are chlorine (green atom) based while hydrogen peroxide, far right has oxygen & hydrogen. These molecules are by definition inorganic. 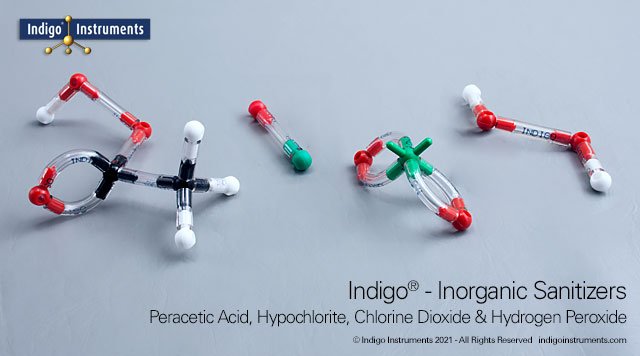 Peracetic acid, far left, is chemically simple but has carbon & hydrogen so is considered organic.

How do Quaternary Ammonium Compounds Work?

QACs are positively charged which attracts them to negatively charged cell membranes of bacteria. This disrupts the bacterial wall and causes cytoplasm (cell contents) to leak out. This damage affects important cellular functions such as solute influx (sodium, calcium, etc.), respiration (oxygen/CO2 exchange), and maintenance of the cell wall itself. Ultimately, ATP production is inhibited which in turn stops protein synthesis & DNA production needed for cell division.

QACs come in a wide variety. They are used in sprays, mouthwashes, boot baths, hard surface disinfectants, and so on.  The common feature in all of them is quaternary nitrogen. The structures that distinguish them are mainly variations in the carbon chain length. If you want to compare some of these differences, click on the links below to view their molecular structures. If you don’t see the one used in your formulation, try entering it in our 3D Molecular Model Builder.

How to Dilute Quats

Most chemical disinfectants ship in concentrated form & require dilution with water. Shipping concentrates is more economical but these chemicals can be harmful to human health, so need to be diluted substantially.

The procedure for diluting a single quaternary ammonium formulation, e.g. benzalkonium chloride, is the same as for any of the inorganic disinfectants. All you need to know is the concentration, usually given in percentage (%) but sometimes in mg/L (parts per million (ppm)). Our dilution calculator can handle either.

Multi-quat formulations can consist of 3 or 4 different QACs but the dilution procedure is the same. Simply add up the percentages of each to get a total. If your supplier won’t divulge this for proprietary reasons, ask for the percentage total. This should be a straightforward request as it is necessary for accurate dilution.

Indigo® QAC Test Strip color charts are calibrated using OASIS 146, a multi-quat mixture of 4 different quaternary ammonium compounds. The concentration of each of the 4 quats is listed as follows:

The total percentage works out to 7.5%

Let’s prepare a 1L/1US quart amount of Oasis 146 diluted to 1500ppm. Enter the numbers below in our Dilution Calculator as follows:

Of course, calculations alone may not be sufficient for your company’s Q/A procedures or health inspectors. This is especially true if you use the solution over several days & the strength could weaken. In the above example, you can confirm you’ve diluted correctly with the Indigo® 1500ppm quat test strips.

The most common quat disinfection applications are at lower strengths. 150ppm is the maximum specified for food products but processing plants can disinfect equipment with 200-400ppm concentrations. The most common test strip for this is the 0-400ppm as shown below. 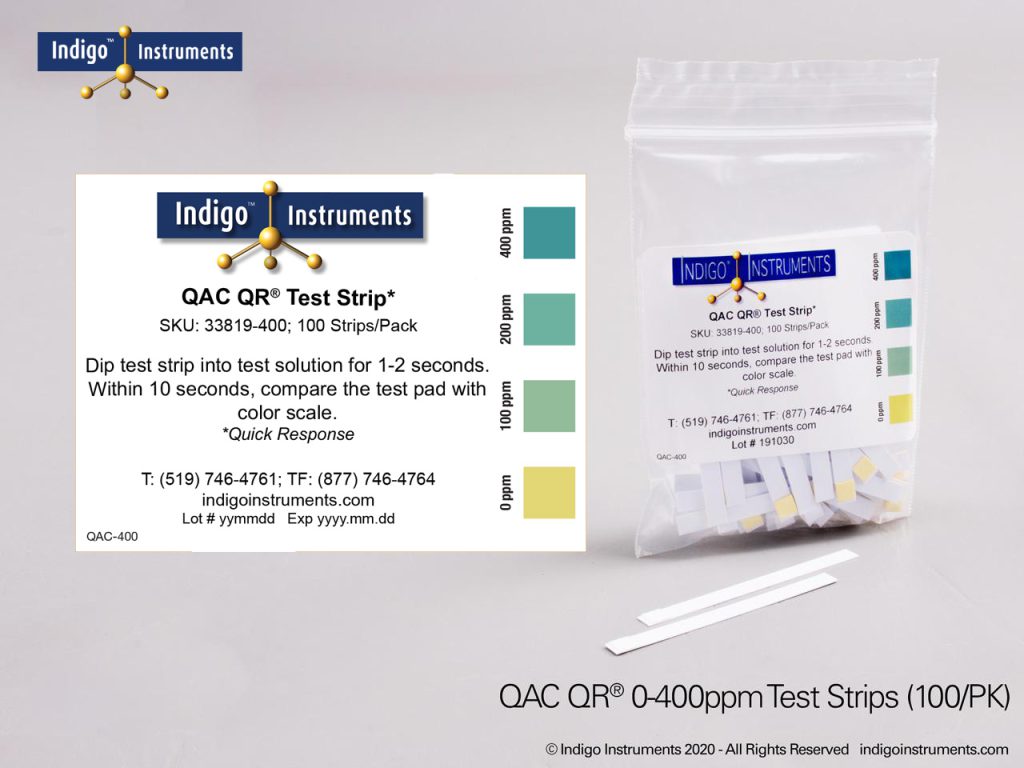 Quat test strips that measure in the 0-400ppm are popular in the food processing industry.

Most standard quat formulas include Alkyl (C14, 50%; C12, 40%; C16, 10%) dimethyl benzyl ammonium chloride. Manufacturers then add others to create unique formulations. The color chart in the picture above is calibrated for Oasis 146. No one color chart is 100% accurate for all quat formulations. However, the generally accepted accuracy of color charts (+/- ½ color unit specification) enables Indigo® QAC Test Strips to measure a wide selection of quaternary ammonium compounds.

The prevalent use of QACs as disinfectants is against bacteria, fungi & viruses. At higher concentrations, in the 5000-10000ppm range, they can control larger pests. This includes lice eggs and the larvae of invasive species such as zebra mussels & quagga. Park naturalists contacted us a few years ago about this & the 0-10000ppm strip was developed for them. 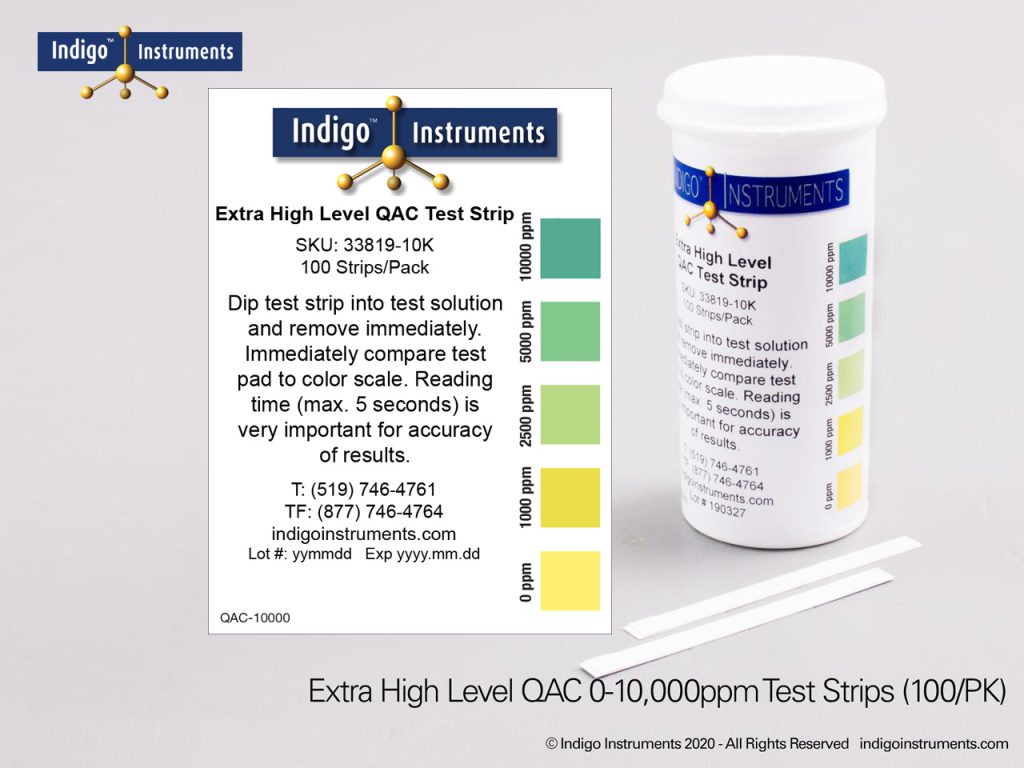 Use this test strip to confirm your boot baths and barbicides are at killing strength.

How Do Quat Test Strips Work?

This is strictly for the technical/chemistry types but we thought we’d include it to be complete.

The test strips employ the “protein-error of indicators” effect. This is where the indicator reacts (changes color) in proportion to the amount of QAC present. The strips don’t measure the QAC solution directly but infer concentration from the change in pH. The indicator pads on the test strips have a built-in buffer so they only respond to the pH absorbed from your solution.  The indicator then reacts (changes color) proportionally to the level of QAC present, not the pH of the sample.

Not clear on percent vs ppm? See our blog: Diluting Chlorine, Peroxide or Quat Sanitizers is Easy. 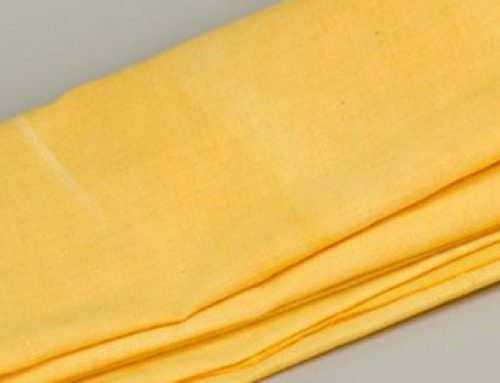 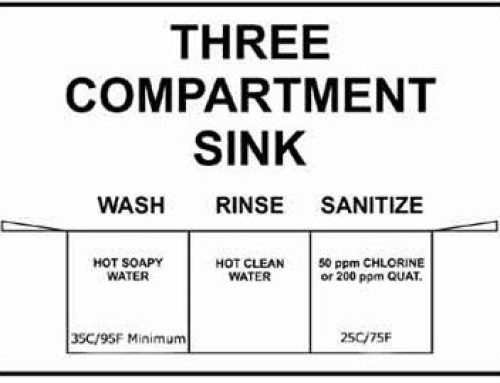 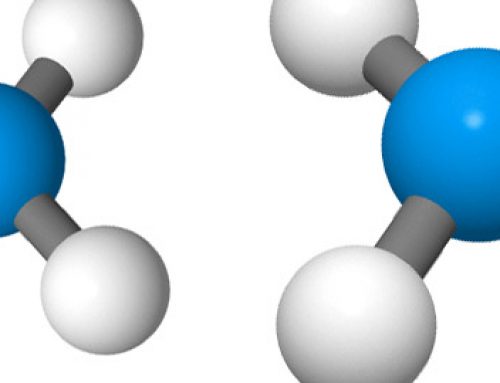